Poppers-----Not The Only Fly For Bluegills 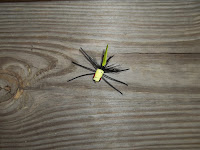 When one thinks of bluegill fishing with the fly rod and the fly that will always produce; the popper comes to mind. In fact this is my go to fly before and after the spawn. For the first time this year I finally had the surface action I had been waiting for. I was determine today to land some bluegills on top and so with my game plan in place I tied on my first of several poppers of the morning to see if I could generate some action. 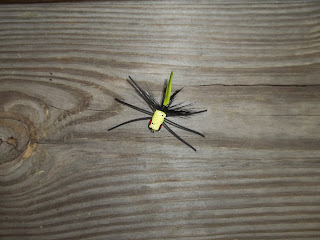 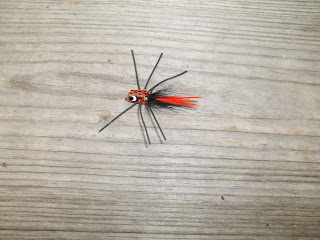 I also fished the black legged red dot small body popper. I use this popper in the spring and fall, mainly because of the red wasp that surface the lake water during those periods. As I fished both of these poppers I notice as they connected to the surface the fish would spook. The lake was extremely clear, with a slick surface making it difficult to present the popper without a little disturbance. Normally this would produce a hit, but today the fish were extremely weary. The light presentation wasn’t producing. So I felt it was time to gather my thoughts and devise a new game plan. 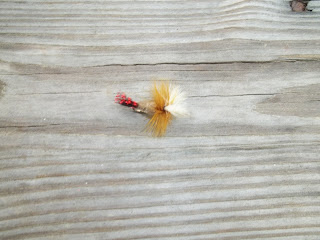 As I sit there going through my fly box I noticed a dry fly that I normally fish indicator/dropper style for trout on the tailrace. I had two Irresistible Wulff patterns in size 8 pinned in the fly box; so I decided to give it a try, because of its light presentation. The 5X leader I changed to worked perfect to compliment the Wulff pattern. 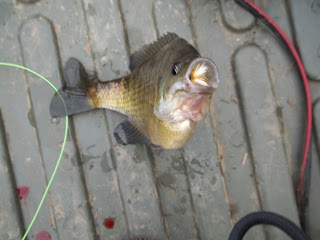 The first bluegill of the morning was a nice female that made it presents known on the 4 wt. I noticed as I work a steep bank with the Wulff that its light surface connection didn’t spook the fish as opposed to the poppers I was using earlier. In fact the fly would touch the water so light that the fish thought it had just fallen from the many over hanging limbs that line the banks. Notice how this bluegill inhaled the fly telling me I had made the right decision to use this lighter pattern. 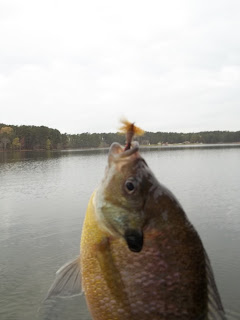 Another nice female bluegill that absolutely exploded on the Wulff, in fact the hit was so hard I actually thought it was a bass. The fly landed perfectly just under an overhanging limb and sit there for a few seconds motionlessly before the explosion. I had to congratulate myself on a great presentation. I actually made a tight loop side cast to get the fly to its target. I have been practicing this cast for some time and today it paid off. 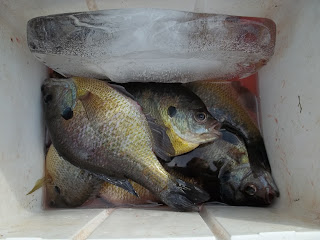 I really like the red popper. Good to see you had success. Fyi i renamed my blog flybugger.blogspot.com. I had some luck with panfish yesterday butnot much in the way of bluegill.

All I need is some warm water.

Wonderful Bluegill, Bill. As you know, I am always so envious when I read of your Bluegill success. Surface fishing is a great way to take them. My theory was why use a good quality dry fly on Bluegill when they will hit almost anything on the surface when their top feeding. Thanks for sharing!

Josh
The red popper is one of my favorite, it has produced for me in bright sunlight. thanks for the comment

Mark
Looking for some crappie reports soon--thanks for the comment

Mel
Very strange trip the other day, with the bluegills--every time the popper hit the surface the bluegills will spook, So the Wluff was used to help with a light presentation. It worked to perfection. thanks for the comment

Nice Bill. I've never used a popper in my life so I've always stuck with favorite dry flies. Works for me.

Grass Carp on a fly! It just doesn't get any better than that. Good job, Bill!! :)

Thanks Dave--it was a blast on my 3 wt.---thanks for the comment