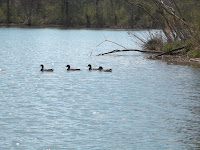 I found the bluegills bedding today, but the only problem they were not cooperating as far as hitting my offerings. I have seen this happen a couple of times over the years and today the fish were in lock jaw mode. I could see some on the beds swimming around, and they were not the least bit concerned with me close by. Even the cricket fishermen couldn’t muster a hit either. So what to do; because this happen as soon as I got on the water and I knew then it was going to be a slow morning. 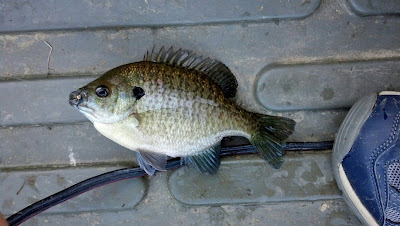 My first fish of the morning using the Seal Leech. It is a dink, but it is a fish and got the skunk off my back. 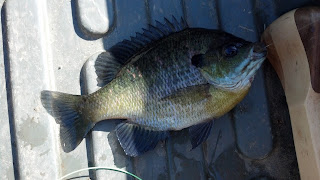 A nice female full of eggs. She inhaled the Seal Leech. Nothing was happening on top and both these fish were caught in deep water. 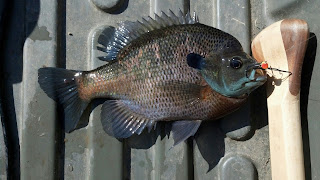 I finally manage to land this bull bluegill on top right before the sun covered the lake. He was resting in a small cove off the main body of the lake. There were no more with him, because I sit and made cast after cast without any further action in the area. 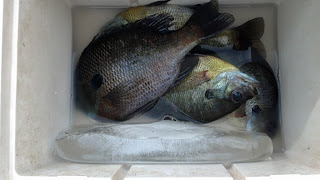 The take home catch for the morning. One big bull and three females. I landed four or five smaller females that I released. I will blame the slow action today on a cold night, bluebird skies, wind out of the east, too much fishing pressure the last week or just plain and simply the fish were not biting. I get to count one for quest today. I am now 82 away.
Posted by Bill Trussell at Tuesday, April 30, 2013

Bill, I'm glad you don't seem too disappointed. I'm loving those guys. I may have missed it, but what rod do you use when you're fishing gills?

Those days happen. But you were out fishing.

Howard
I seldom use anything above a 4 wt. on this lake. My go to fly rod is the 3 wt--8 1/2 ft. along with the 4 wt using nymphs. I mix in the 5 wt. once I begin to fish the big lake Smith. I will begin to fish it next week. Thanks for the comment

Alan
If didn't have a slow day now and then it wouldn't make fishing as much fun. Trying to figure out what they are hitting is part of the game. Thanks for the comment

A slow day of fishing beats a good day of most anything. At least you had some action. Plus you are one closer to the goal.

I don't think there is anything more frustrating when you can see the fish but not catch them!

I'd rather not see a fish all day than to see a bunch and not be able to catch them.

I've seen that many times when they are on beds. They won't even push your fly away from the bed. They just sit there and stare at your fly. I've found they will hit at a certain time of day. I have never found an exact time it seems to change all the time. I'll be fishing for 3hrs then there is a 15min period where they really get active and start hitting like crazy. Then a switch flips off and they go back to looking like statues on their beds.

Brain
I learned long time ago that fishing can't be stellar days all the time. thanks for the comment

Brook
Funny thing I did manage to land some bluegills in deep water. I assume they were not bedding. thanks for the comment

Kevin
I have experienced this situation as you said, in one 15 minute span they will hit and the next 30 minutes they turn off. thanks for the comment

Man, you are great at catching bluegills. I am envious at how you can do that. This reminds me, I need to get back on track and catch some. Went out for bluegills today and only landed a chub.

Thanks Josh
My quest will take a hit this week, because I will be out of town. Next week will be my last week on Walker Lake. After that the action will really heat up on the big lake "Smith" --there are some really nice bull gills off the rock walls. In fact some of these fish never on bed, which makes adds weight to them. Hope you get started soon on your quest. thanks for the comment