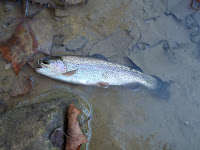 I must admit that I haven’t had much time to fish the last couple of months with other projects going on. is on its annual drawdown and it want be back to normal until Spring. When the drawdown occurs the fish become dormant and suspend and become less active. The last time I fish the lake was in August and had limited success. The tailrace has become my main target the last couple of months with some success. At the last Trout Unlimited Club meeting there was a discussion about the severe shortage of food in the tailrace. One can turn over rock after rock and see no evidence of the leeches, scuds, mayfly larvae, or even the tiny shrimps that was there a year ago. Our club is going to do some research with the game and fish to see what has happen in the way of the food chain. The last trip I made was a couple of weeks ago and I manage to land a couple of trout that was in good condition considering the limited of food they had to eat. 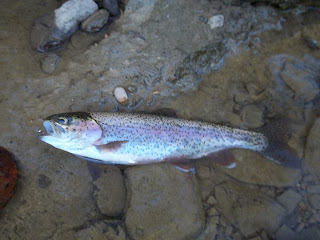 There was no action at all on top for this day and the only way I could get a take was to use the midge tight lining. I had read an article a while back on this method of fishing and decided to give it a try. This bow was taken using a size 20 Zebra Midge using a tiny weight above the midge. The current was  slow so I was simply high sticking through a small seam that was about 4 to 4 1/2 ft. deep using a . 4 wt. The takes were extremely light, so I had to be on my game to get the hit. The only complaint I have with this style of nymphing is the hang ups at times. I found out that if you don't react even at the slightest tug, then you diminish your changes of landing the fish. I tried this same area with the indicator but couldn't get any takes, so that was really what brought on the tight lining method. I am always up for any new method in trout fishing and today I got to try one that proved to be successful. 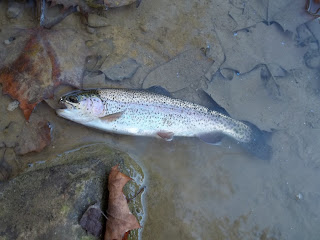 Notice the midge right in the top of the mouth where it should be. With leaves all over the surface, it made for a mess trying to do anything with the dry. Either a leaf would hang the fly up or the leaves would interfere with the line. One theroy most of the club members agree on as for the lack of food is less generation which creates more moss on all the rocks. I could make this same trip last November and land at least a half dozen trout. Of course the food was there then as opposed to now. Considering the limited amount of time I had today and the shortage of food for the trout I think I did pretty well. Does anyone have any suggestions as to why the food supply has dropped off?
Posted by Bill Trussell at Saturday, November 17, 2012

Bill,
Interesting question. The "moss" or algae that grows on the rocks actually creates a food source for many aquatic invertebrates. Although it might make it more difficult for us to see them. Some of the most prolific streams I know are one that have lots of algae and aquatic plants. Of course not algae is ideal- Didymo is a good example.
I think some of the heavy flood events can have a scouring effect and essentially wash away a lot of the invertebrate community. As small as those little guys are (especially the scuds and others that don't have flying adult insect stages), it takes a while for them to recolonize. This has happened in AR on the Norfork in recent years. I've talked the locals up there that had experience before and after the flood so to speak. It really boild down to uncontrolled releases that scour the river bottom. I think all of the heavy spring rain and subsequent heavy releases are the primary cause. I know that the Sipsey can be pretty raging when it's at full release and not much different than the releases in AR that messed things up. The Mid South Fly Fishers and other groups have worked hard to try and establish release protocols with Army Corps of Engineers who controls the AR taliwaters. Unless AL Power takes the value and health of the fishery into consideration, things probably never will be quite right.
Just some thoughts from your biologist buddy.

The above comment should have read "not ALL algae is ideal- Didymo is a good example."

That's tough. I'm sure they will find a reason for the decline in food.

Hi Jay
Some in the club seem to think that the constant generation at high levels has actually washed most of the trout down the tailrace. Most club members agree that Alabama Power has little regard for the trout themselves. The Bass Fishermen on the lake side have much more influence on generation than the trout fishermen on the tailrace side. In fact Alabama Power is supposed to use a siren signal when generation is going to occur, but most the time you never hear it. My son and I were there back in the summer and he almost got caught on the other side; he barely made it back to the steps before the water got to him. It can be a dangerous situation if you are not alert. He will never fish the other side again after that incidence. As for the moss it is everywhere in areas less than a foot deep. Some members say they have check under the moss rocks and found no food. The Game and Fish are supposed to take a look at the area sometime this month. I will keep you posted on the results. Let me know when you and Kelly can come up and I will meet you there. Thanks for the comment

Hi Alan
I hope they solve the problem soon, because Spring will be on us soon and the trout there is one of targets early in the year. Thanks for the comment

I'm not a biologist or entomologist or any kind if ist, I just know that the drought seems to have directly affected everything this year. Hopefully a more normal year will bring a lot of water back to life.

Howard
I am guessing it has to do with the generation schedule. This power company here is clueless when it comes to trout habitat. I only wish I had the waters you have out that way. Thanks for the comment

Interesting post Bill. Keep us posted and let us know what they find. Nice fish by the way. Can't go wrong with a zebra midge on those tailraces.

Hi Ty
Thanks goodness for the 3000 trout they dump in there every month; because without those the place would have less rainbows. The trout doesn't spawn in this tailrace. Hopefully they can find a solution. Thanks for the comment

bill, I'm not going to lie. i know very little about trout and even less as to why their food is low. i did read your blog entry though and learned from it!

Hi J
I do know enough about this tailrace I fish, to know that the food supply is disappearing at a rapid rate. I hope the problem is solved soon. Thanks for the comment