Tailrace Fishing can Really be a Challenge 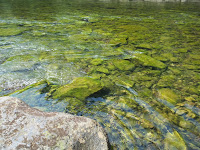 Fishing trips for me is always a learning experience, especially if the trip doesn’t turn out the way I imagined before I leave the house. The tailrace today was the ultimate learning experience. I left the house with the intention of using a variation of the Mayfly patterns; all reports indicated on the Sipsey Forum that the Mayfly was the success fly. After arriving at the waters edge with a guy from Huntsville tagging along beside me, I made it to my first honey hole, where he moved on up the tailrace about . to another great hole that I was going to try if my first choice didn’t work out. ( so much for fishing along this morning) I decided before I ever made a cast that my dry pattern wasn’t going to be successful, no rises. In fact it was kind of strange in that there was absolutely no surface action at all. So being the optimist I made my first cast and as the fly landed in a fairly fast run I thought I just had to get a take on this cast because the drift was so perfect. Just goes to show perfect cast and excellent drifts don’t always produce. I finally gave up on a variety of dries after realizing I was wasting valuable time with a limited amount of shade fading fast. I didn’t move although I wanted to go up and try a couple more holes before the sun got them, but I knew the trout were here. I switched to my go to nymph which was the Zebra Midge using an indicator on a 5X tippet. I made a couple of cast with no success, and decided to move the indictor up on the leader about to get a little more depth on my midge. I proceeded with another cast and finally got the drift I was looking for and ever so slightly the indicator moved and my first bow of the day was netted. I have to say the trout made its presence known on the 3 wt. I continued to make cast after cast with no more success, so I moved on up to one of my holes near the dam. As I approached the area I was going to fish I notice there was still no rises at all in fact as I walked the bank up to the hole I saw no activity. I continue with the Midge pattern and on the second cast I set the hook on another nice rainbow that went straight down stream. I landed the trout by bringing it to the shore and not using my net, because it was easier and quicker going to the shore as opposed to the net. I can’t explain why the bite was over after this fish but it was like someone turned out the lights and everyone went to bed. Sometimes it doesn’t take a lot of fish to satisfy and today was the case. Just being here was a plus and today’s trip will continue to make me come back here time and again because I want to keep learning about this great sport?

The Zebra Midge did the trick with this nice rainbow

One is enough, two is better and if that's all there was, it was better than the skunk.

Bill, your right, tailwaters can be a pain in the ass. When they start eating that small stuff your just might throw on you favorite pattern and let it rip.

Its a good post. I do like fishing but trout is not that much availiable in our arena. We do carp farming and Carp fishing. I have been doing Carp fishing since my child hood. I enjoy it most. However thanks for this nice post indeed.

doesn't take much to put a bend in the 3wt.

Blake
The 3 wt is my go to fly rod when fishing this area most of the time. With 3000 stockers per month in this place 10 to 12" it just make sense to fish a fly rod that is going to give one the ultimate fight. Thanks for the comment

Carp
I would love to fight the carp on the fly rod, but finding the carp in Smith is tough. Thanks for the comment

Alan
Yes the talirace is tough; I wish I had the streams in your area. I often tell my wife that we should have settled in the Northeast if not for the fishing, but the summer weather. Thanks for the comment

the life of a tailwater fisherman. Sometimes it comes easy, and sometimes it just falls short of expectations. But either way, it's always good to get one...just because.

Sanders
The trip I made 5 weeks ago was a banner trip in that I landed 11; ever since then I have been trying to repeat that trip----not going to happen like that every time. Thanks for the comment

You said just being is all I really need the fish are always bonus points.

Kevin
I have learned when fishing for trout; one, two, or three can make the trip. Trout fishing will be the only kind of fishing I will be doing until fall. It is just too hot for the lake with all the falling water. Thanks for the comment

Howard
As I told Kevin the extent of my fishing from now until fall will be the tailrace. It will give me a chance to learn the area. Thanks for comment