Fishing The Spent Mayfly in Late Summer For Rainbow

Today was my chance to fish with the Spent Mayfly on the upper portion of the tailrace. I was planning on fishing below the pump station in hopes of landing the bigger rainbow, but repairs were being made on the access point in that area so I stayed in the faster water above the pump station. I started at the first access point where I found two other guys fishing above me and I thought I should just move on, but something told me to stay and give the Mayfly a try here.  As usual no rises at all; but I was still determined to fish the dry for a while. After a few cast I had my first rainbow of the morning. I continued working the same area for a couple of hours, which was all the time I had to fish.  There were numbers of fishermen in front of me working the other spots up the tailrace so I decided not to move.  This place gets a tremendous amount of pressure so one has to be on his game to even land a trout, in any of the areas that hold fish. In other words these are highly educated trout. 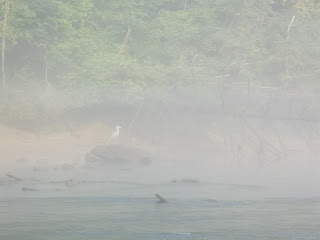 This guy was fishing too in the early fog, right after I got this shot off he/she flew on  to tap into another hole 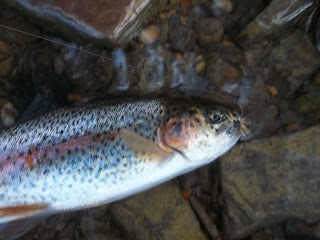 The Mayfly right where the hook set was suppose to be top lip---this one was really a lot fun on the 7  1/2 ft. 3wt Temple Fork-- 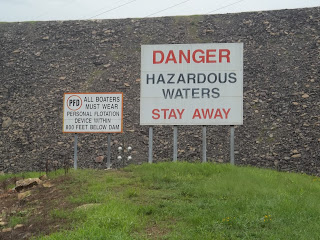 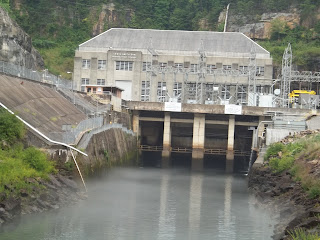 Two generators control the amount of water being released at any give time of day--the water here at the dam and 1/4 mile below is between 56 to 58 degrees--notice the white PVC tube, that is the tube used to dump the 3000 trout a month into the area below. 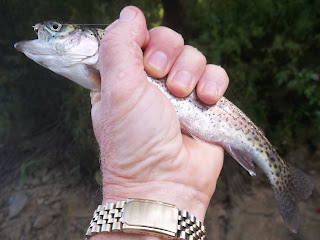 Landed this bow on the famous Zebra Midge. I always have one handy when I am fishing here. 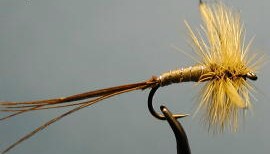 The Spent Mayfly, is just a little variation from the original Mayfly, I like this pattern much better because of the amont of hackle, which in turns helps the fly to stay afloat longer. I was kind of proud of myself today after talking with four other guys who said they didn't land a single trout.  I would like to think my success today was from my own ability, and not from just being at the right place at the right time.  With all the speculation aside I still had a great morning fishing a place I am slowly getting accustomed to.
Posted by Bill Trussell at Sunday, August 19, 2012

Kelly and I fished the tailwater today for the first time. We decided to go fish a couple hours before sunset. We didn't catch any... today was a learning experience. We did see a guy fishing a Rapala (or similar lure) catch one and there were some bait fishers that left with a few in a beasket.
We went in just below the pump station. We also checked out the dam area, but it didn't look very inviting to fishermen there. You'll have to tell us where the best access spots are.

Sometimes the fishing Gods are just in you corner. A job well done.

I always like to think it's skill...but anyone who knows me, can tell you that I catch fish in spite of myself...so it must be luck.

anyway...well done catching a few nice looking bows. they are always fun on the fly.

Thanks Mark, I feel I am slowly learning some of the best areas on this tailrace.

Hi Jay and Kelly
Your best fishing in the faster water is above the pump station. There are not that many large trout in that area, but you have a better chance of getting some really drifts; which in turn will sometimes get you more takes. The majority of the trout you will land above the pump station will be in the 10 to 12 inch range. I use my 3 wt and I really get a good fight from that size. There are 6 good holes above the pump station. Of those six I usually land trout in at least 3 to 4 every time I go. To find those 6 holes just watch where the anglers are fishing. The best fishing is early in the morning, before the sun hits the surface. I have been landing a couple early on dries, after the sun comes up I go to a midge, pheasant tail, and scuds. The takes are extremely light and at times I missed more than I land. I have really learned how to read the indicator much better because of the light takes. I will be glad to show you those holes when you guys come up. Thanks for the comment

Sanders
I sometimes feel as Mark said that, the Gods are with me at times on the water. Thanks for the comment

Luke
The reason I like this little fly rod so much is the lightless, and of course the small Redington reel which gives it super balance. Thanks for the commnet

Absolutely your ability brought you that success. You've paid your dues there and figured a few things out. All those hours astream pay off eventually. Nice job!