This weekend I spent four hours early on Smith chasing the Spots and of course the big bull bluegills. I was fishing a full moon and I knew the fishing should be good and I wasn’t disappointed. I didn’t want to waste time gunning the motor down the lake, so I started right at the lunch with the black Boogle Bug using my 5 wt. Redington. After a couple of cast I connected with a 16 spot my largest and landed four more before the sun took over and turned the bite off.  In fact nothing was happening with the bass even down deep with the Buggers or Craws on up in the morning; so when this happens on Smith you come prepared for the next level. I had my . 4 wt with the BreamBug’s Little Fatty size 8 tied on and started to work the banks with cover. The popper didn’t disappoint helping me land some super big bull bluegills. I was moving it with a slight jerk which was causing some water movement. I would let it set for a few seconds and then the popping hit would occur. These big gills on the 4 wt. were giving the rod quite a workout. After the top action slowed I switch to the Upside Down Bream Killer by BreamBugs. I was fishing in cover and letting the fly sink some and moving the fly slowly over the cover and usually the hit would occur right above the submerged limbs. I was using the 5 wt here because I needed the extra backbone to land these big boys. I did break off once and lost my Upside Down chartreuse but the black Upside Down prove to be the killer. I ended the trip with a total of 11 bluegills with six being the ones I counted toward my goal of 100. After adding these 6 biggies I am 76 away. Catching these big bluegills is something else on the fly rod---you just got to love this stuff!!!! 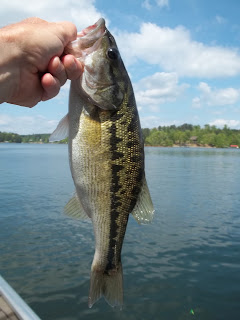 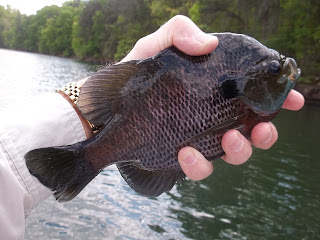 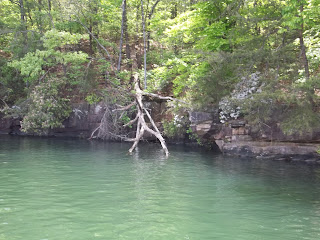 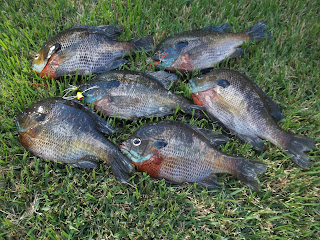 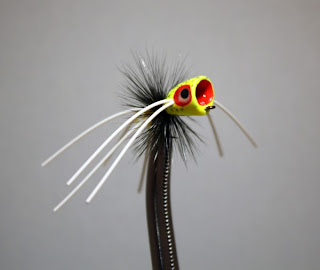 Glad to hear you got into some spots Bill. Awesome fish!

I prefer using a smaller why rod on lake bass. They don't fight like smallies and I like a little action too. Those bream look yummy.

Those are some hefty gills Bill.I'd never tire of chasing them with a fly!

Bill, you're having way too much fun. Save some for the rest of us.

J
The spots on Smith never know when to quit fighting. Thanks for the comment

Brk
I hope I don't lose it, I am losing poppers at a fast rate landing some of these gills. Thanks for the comment

River
The reason I use the 9 ft. rod is for distance. The water on Smith is super clear to the point where you can see 10 ft. down. If the spots see you then the game is over; they are pressured heavy on this lake and the least bit of distrubance they will leave fast. Thanks for the comment

Howard
I wish you lived closer to go on a trip with me to experience the fight in some of these fish. Thanks for the comment

John
You are in the zone with me, when it comes to bluegill fishing. I hope I make my goal of 100.
Thanks for the comment

When we go Bluegillin' and get one of these nice ones, the lucky angler yells "bull". Fun activity to watch and an absolute blast on 4 or 5 wt. lines. Atta' boy, Bill!

I have never fly fished but I've heard it's a blast! Probably end up picking it up in the future. enjoyed this post. nice looking bluegill, and that spotted bass was a looker as well. Anyway, I'll be checking in from time to time. feel free to check out my blog as well!

J
Glad you enjoy the blog--if you ever start fly fishing you will be hooked. Thanks for joining up with Fishing Through Life.

Soo happy you tagged up with a UDBK Bill.