Great Information Concerning Your Drag System on Your Fly Reels A two fold post today, first dealing with a short trip to a 10 area pond that is fished very little. Usually when I make this trip I can expect to land numbers of gills and bass, but nothing was happening at all on top today with the bass. My buddy and I did manage to land some bluegills with the brown bugger and a small stonefly. Yes a stonefly size 8 was actually attracting bass 4 to . deep. The trip ended with 20 or so between the both of us.
Now to the second part of today’s post which is something that I thought I would past along to you guys in case you didn’t realize it. It has to do with the drag system on your fly reels. Some fly reels have the feature to change from the click drag to simply using your palm as your drag or palming. Redington is one company that has this feature. I have used this feature on my 5/6 Drift Redington. To change the drag system on the Redington, simple remove the spool and turn the drag dials so they will not be in the click position. By during this you have change the drag system to the palming feature. In other words you have a fly reel with a free spool, which means you can spin the reel face and take up line a lot faster than one can by reeling in the fly line. I have used both methods and really like the free spool feature, because of the line pick up. I am just curious to know if any of you guys have tried this feature. 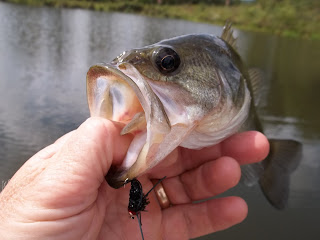 ﻿
A real surprise here with the Stonefly, when you think Stonefly you think Trout
Posted by Bill Trussell at Thursday, September 22, 2011

Email ThisBlogThis!Share to TwitterShare to FacebookShare to Pinterest
Labels: Fly Reels and Rods

Hi, Bill. Really liking the changes you have made to your blog template. Very eye catching. Been awhile since I had a fly rod in my hands complete with the reel, so I can't comment. BTW, when you have a minute, could you update my link on your blogroll. I am now the Rainbow Chaser. Here is my link to the new blog site.

Mel
Will make the corrections----thanks for the comment as always.

spot on with this write-up, i like the way you discuss the things. i'm impressed, i must say. i'll probably be back again to read more. thanks for sharing this with us.

Lee
Glad you found this post useful, I use the drag system without the clicking sound a lot now. thanks for the comment