Today’s trip was not quite what I expected as far as number of fish was concerned, but the companionship and the friendship I developed today with Jay from The Naturalist Angle Blog was worth the trip. Jay arrived at my house around and we left and proceeded to to try our hand at some of the big Kentucky Spots. There was only one problem the Spots forgot to turn on that violet hit mode. So we both spent the morning landing some nice bull bluegill and Jay did manage to land a 12 ¼” spot and another smaller one both on top. The top wasn’t working not because of the weather, but because of the feeding pattern. I told Jay that late yesterday evening there was a lot of cloud cover in the area and that was probably when the feeding occurred. Some of the best top water action is on cloudy days on Smith. This morning there was little wind to speak of and the water temp was around 85, which is excellent for top water action but nothing was happening.
I found out what I already knew about Jay, that he is an accomplished fly fisherman. He was making some exceptional fly presentations and some extremely long cast this morning, because most of the morning we were some distance from the bank. I told him at the start of the trip that if the spots could see you they would not hit, so some long cast was in order. As the morning wound down and the sun started to take away the shade banks we switched to nymph style flies, which produced one spot for me on a size 8 crayfish: nothing else happened from down under the rest of the morning. It was not from like of trying because we both put forth a valiant effort, with exceptional placement and presentations, but none of that matters if the fish aren’t there and not hitting. I looked forward to another trip with Jay and hope the Kentucky Spots are in a better mood whenever he makes his way back to Jasper again. 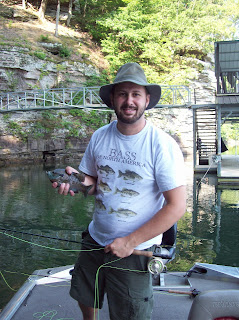 Jay with one of the big bull bluegills﻿ 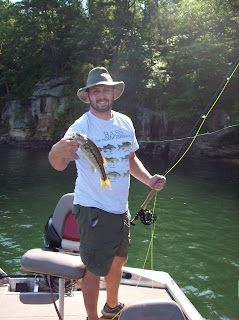 Jay with the best spot of the day

Bill,
Thanks again for taking me out on the lake. I had a great time... even though the big fish weren't in the mood to play. Looking forward to doing it again sometime soon.

Jay
You got to come back in the fall, I think it will make a difference on top. I really enjoyed the trip even though things were slow.