My Son-in-Law's Trout Fishing Trip in The Smoky Mountains

I am reporting for my son-in-law who along with his wife, son and his parents spent Thanksgiving in the in Gatlinburg . B.T. manages to work in a couple of days of trout fishing on the Little River which runs through the heart of Gatlinburg. It is one of those streams that is fed year round with springs flowing out of the high elevations in the mountains. Brook, Rainbow, and Brown trout make Little River their home. B.T. said the trout fishing this past week has been slow as far as dries were concerned. The two days that he fished produced seven nice bows with the largest being a 13” in length. They were not caught on the fly. All were taken on the trout magnet in the color of chartreuse/black. The presentation was tight lining with the hits occurring on the end of the drift. B.T. said they were a blast on his Micro-light 7 ½ ft. rod. This rod is like using a fly rod because you are getting the play that is associated with a 7 ½ ft. to an 8 ft. fly rod. If you are not using the fly rod then this is the rod you need to go with especially in tight places. This is an awesome trip they made, because of all the activities that one can get involved in there. My wife son and I hope to make the trip with them next year. 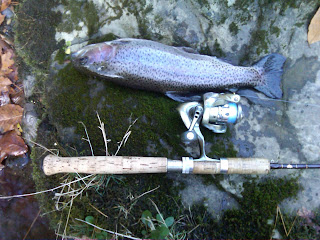 Nice 13" Rainbow caught on the trout maget. This is a killer little bug for gills as well as trout.
Posted by Bill Trussell at Monday, November 29, 2010

I need to get some of your wisdom when it comes to Trout Magnets. I've got a whole box full, but never caught diddly with them.

Michael
The magnet can be fished using a fly rod by just tight lining. My son-in-law likes to use the micro light because it is easier to cast in tight places. In the Smokies there are some tight places. The magnet would be a killer on your long rods that you use. Thanks for the comment

Trout magnets can be deadly. I've used them in the Smokies too on ultralight spinning gear. I found red to be the best color and it helps to just let them sink and do their thing. You don't have to work them much except a nice slow retrieve. They've come out with crayfish version now called the Trout Slayer.
Check them out at the following address: https://www.troutmagnet.com/store/Trout-Slayer-c-4.html
I've tried one pack and didn't land any lunkers on them. I've heard from some a guy at our local Bass Pro that they're even better than the original in AR... which makes sense because there are lots of crawdads in the Ozarks and trout and Smallmouths love to eat them.

Jay
I agree they are one awesome little lure. They are my go to lure sometimes when nothing is happening with the fly. I am trying some this spring on the lake tight lining and see what happens. I will check out the craw, I think it will be better than the magnet. Thanks for the commnet

Well, Bill, as far as the Trout Magnet goes, I still am in research mode. I have a box full also. I just haven't applied myself seriously to them yet. I am planning on doing some ice fishing with them this winter as an ice fishing jig. Some folks sure swear by them.

Mel
I started using them on a limited basics last year, and had some success on the black/green, I am trying some with the fly rod this spring. Thanks for the comment

Well I have never seen one of those "trout magnets" but it sure sounds good :)

Blake
A guide at the Caney showed me these last spring. I had never heard of them until then. Thanks for the comment.

Its awesome! I have liked this post because I love fishing. But sometimes, I go to fishing with kids.
They make noise and make very disturbing as a result I can’t catch fish.

Marcel recently posted... how to set up fishing pole