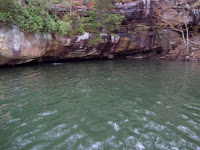 It is getting close to that time of the year to find those big gills around the water's edge protecting their beds. In this part of the south, it will be happening in about two weeks. This has been a busy week for me as far as fishing is concerned. I started out the week fishing on Tuesday, Thursday, Friday, and Saturday. My wife told me that I should have my fill of fishing for a while. Is there shut a thing as getting your fill of fishing especially someone who eats, breaths, and sleeps fishing---I think not!!
I did a post on Tuesday’s trip, concerning the black gnat nymph. Well after that trip I decided I would go back to the same area I fished on Tuesday and use a popper. I was surprised I got fish to come up and hit a popper in 63-degree water, especially in depths of 10 to 12 ft. I manage to land 10 on Thursday afternoon. I was still using my little 3 Wt. 7 ½ ft Temple Fork rod. One can get a rush when he sees that smack on that little popper knowing that all you got to land that bull bluegill is that little light 3 Wt. rod.
My son-in-law B.T.  made the trips with me on Friday and Saturday afternoon. He had never fished for bluegill with the fly rod and wanted to go out and try to land some quality fish. I had told him about my previous trips so he knew in advance what to expect. He was not accustomed to fishing still water as opposed to running water; with the fly rod so it took a little adjustment of fighting the wind and learning a new pattern. He landed between 20 and 25 bass and bluegills both afternoons. We could have fished the tailrace below the Smith Lake Dam for rainbow, but with bluegill, season near we just couldn’t pass up the chance to throw some poppers. Both trips were superb and it was a blast to fish with a B.T. who my wife and I consider our second son. 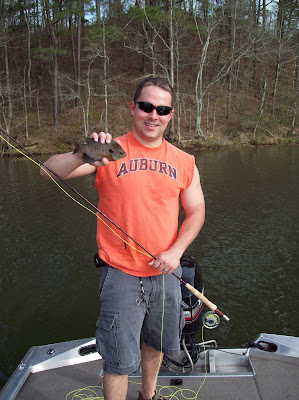 I just wonder if those Alabama fans know how to catch bream like this???? 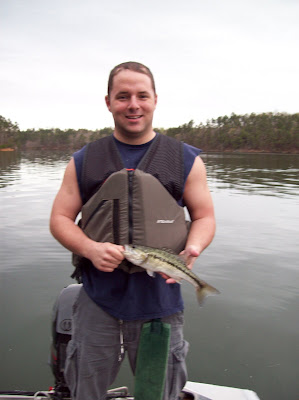 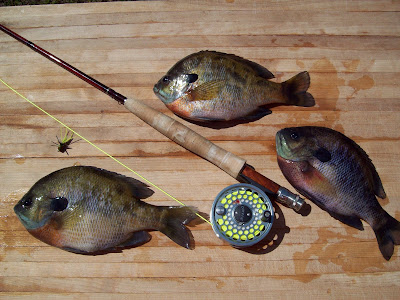 You got to love landing these brutes with the fly rod and that tiny little bug. The one on the lower left pushed 13 oz. 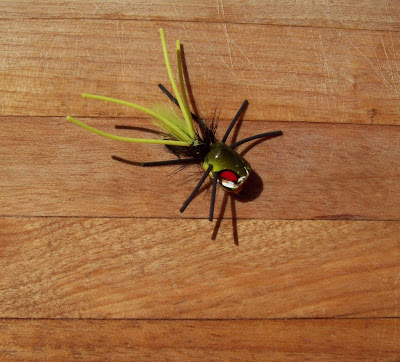 The story behind this little bug----one of the bream my B.T. landed, inhaled this little fly into his stomach with only the tip end of the fly showing in his throat. Even the forceps wouldn’t retrieve it. I had to perform surgery on the fish that night when I clean it to retrieve the little bugger; so switching to another popper kind of slowed things down -----this is like when your buddy is catching fish left and right with this little fly and you ask him; hey do you have another one of those flies? He says this is the only one I have, well the bream had the only fly we needed that evening and it was deep in his stomach.
Posted by Bill Trussell at Sunday, April 04, 2010