A Big Dose of Gill Mania 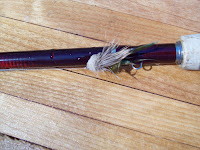 Tuesday’s fishing trip was one of those days when you say to yourself could it get any better. After arriving at the lake around 1:30 I proceeded to get all my gear and little Raider boat out of the truck and head to some of those out of way fishing holes on Walker County Lake. As usual, I was joined by a slue of other boats. Then there were the endless groups of bank fishermen with their reels all positioned on various places on the banks. So I was fortunate to be in good company all afternoon. There were a number of obstacles I had to conquer before I ever got started the main one being the wind. I try to always use the wind to my advantage when fishing from a boat and today it seemed everywhere I trolled on the lake the wind followed and switched directions opposite to my cast. Does that wind statement sound familiar guys? Some days on the lake it just seems like the wind has you pinpointed and it is determined to disrupt any casting you have in mind for that particular spot. So much for the wind factor, on with the trip I started on the east of side of the lake around 2 p.m., fishing the 10 to 12 ft. deep clear water around weed beds. My 3 Wt. was the rod choice with a number 12 popping bug black and dark green. I immediately landed 3 large bulls practically in a successive cast down the bank. This was the same bug my son-in-law B.T. caught most of his big gills on last weekend. This bank was in the shade most of the afternoon which made for some excellent takes on top. I continued looking for shady banks with this same bug pattern until one take was so violent the fish run deep and broke off in a brush pile. At that point, I had 8 in the cooler. I immediately switch to a similar pattern which slowed the hits. I was getting movement under the popper but no takes. This proved to me color and pattern is a factor when it comes to poppers. I decided to switch to the black nymph gnat, which I used earlier this year. That day I had a lot of success with it even in the sunlight. After fishing with it until sundown it proved it's worth helping me land an additional 10 more bulls. I was fishing it like a streamer slowly moving it back to me. The takes were so awesome that I lost 3 gnats in the brush and another fish just broke off. With the sun nearly out of sight for the day, I decided to try something one of my bloggers suggested last week. He told me I could really land some nice bream using the Muddler Minnow size number 8. It just so happened that I had one tie on my 5 Wt. 8 ½ ft. So on my way out, I decided to fish one of the many treetops in the lake. With a few false casts, I made a good 50 ft. Muddler presentation. I twitched it slightly and bam the fish was on and carried me in a semicircle on the other side of the boat. I managed to finally land him after stripping line at my feet, and gently reaching down and lifting him in the boat. I had my digital scales with me and he weighed in at 13.8 oz. my largest ever on the fly. As I made my way to the landing I wanted to make one more cast to the other treetop adjacent to the dock. With one cast left, I did a shoot cast in front of the treetop and within a few seconds a large bull inhaled the Muddler and took off for deep water. I landed him and he weighed in at 12.14 oz. my second-largest bull ever. At that point, I would have gone to the depths of the lake after my Muddler Minnow if it had been hung. You know in fishing there are always those trips you never forget; this was one of those trips. I look back on the many, many fishing trips I’ve been on and this was the best warm water fly fishing trip ever for me. By the way, I WILL BE BACK!!!! 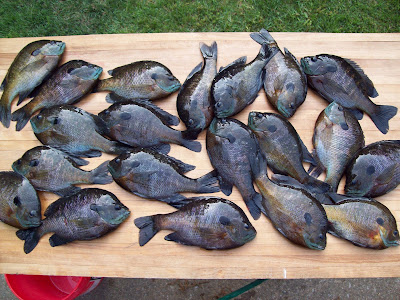 To be filleted and put in the freezer. This lake is loaded with this size bluegills because it is stocked each year with 100,000 bream 4" long. None of these bream were on beds. The water temp. was around 72. I knew blogging would help me improve fly fishing!
Posted by Bill Trussell at Thursday, April 15, 2010

nice catch...I have yet to ever one though

Hi Pat
These fish are awesome to eat. I fillet them with no bones. My wife bakes them using Zadiran seasoning, with cold slaw, french fries baked and hush puppies baked, and you got a nice meal. A lot people including me like them fired with french fries, hush puppies fired. Of course you run into the cholesterol problems, which I have to watch out for. Either way good.

None of these bream were on the beds. They were in deep water right at the edge of shallow flat nooks, where I presume they are going to bed. So much fun catching these fish. I will be doing a post on the flies for the gills I caught in the next couple of days. I am added as one of your followers. I know I will enjoy reading your blog. Great Job!

Dennis
This may be my last big catch on this lake. I found out this morning that the caretaker just dumped 3 tons of fertilizer in the nice clear water. The bream and bass can't see your fly as well in 6" visibility. I will make one more trip next week, but I am not optimistic.

They don't call them "PANfish" for nothing!! They do well in the pan!!