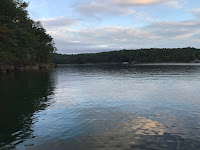 My bluegill quest has been lacking lately. I decided to see if I could add to the numbers Friday by fishing before a weather front coming in on Saturday. Your fish-catch ratio can improve fishing before a front. I couldn't ask for a better morning with cloudy skies and very low humidity to fish the popper and black gnat on Smith Lake. In fact, I had clouds overhead until 10 AM after that the sun took over and the bite practically stop. 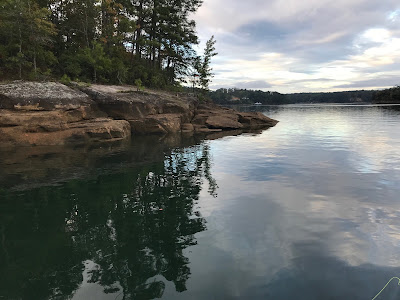 One of my favorite banks in Ryan Creek to fish, I've landed numerous bluegills and spots from this area. 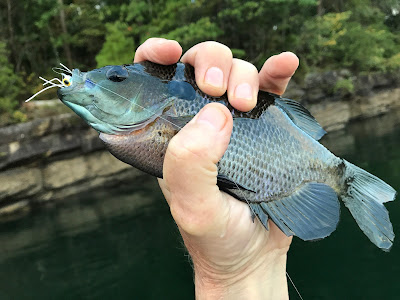 This bluegill was taken using the Barr Nunn popper letting it sit motionless for what seemed like forever for a hit----but the patience paid off. This was the way the bluegill wanted the fly the first hour of the morning; a complete contrast from the spawn where the fish will kill the fly as soon as it touches the water. 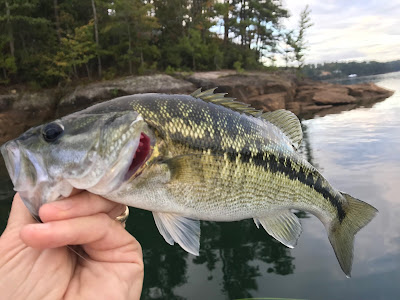 The bass wasn't as active as the bluegills, which was alright with me, because the mission today was to improve on my numbers. This spot gives the 4 weight quite a workout making me think he was much larger. 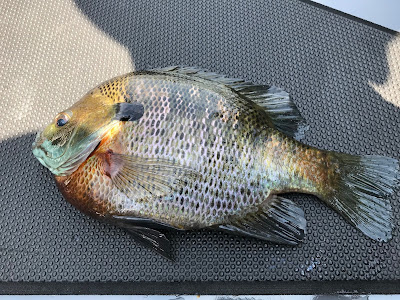 Worthy of the count 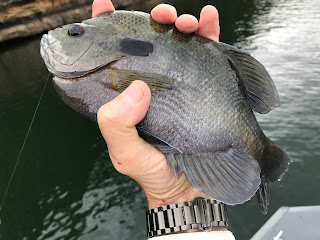 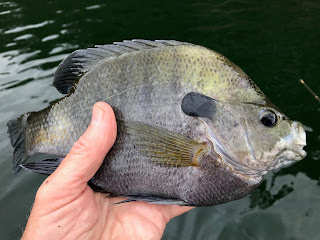 The prize of the morning was this monster bull gill taken using the black gnat fishing with the sink-tip line. The last spawn ended the first week in August on Smith Lake and this bluegill showed the signs of that spawn. He was not in good shape as far as body weight. He would have weight in at a pound before the spawn but today he tipped the scales at 12 ounces. Both big bulls deserved their freedom after an epic fight against the 5 weight, both will count towards the quest, I'm 13 away from reaching my goal------GOT TO LOVE LANDING THESE BIG BLUEGILLS USING THE FLY ROD!!!

I had fund landing little Gills on a fly rod. Have to work on catching bigger ones.

Bill, impressive size to those bluegills.
Does that lake cool down with the season change, and if so does it affect the fishing, for the better or worse?

Mark
I use my 2 wt. to land smaller gills. a big gill can be an added surprise on the 2 wt. Thanks for the comment

Alan
I usually stop fishing Smith late October, because the fish go so deep its much harder to attract a hit, especially if you've using a popper. Late October is the my signal to start fishing the tailrace for the rainbow. Thanks for the comment

Those are some fat gills. I bet they gave a nice tug.

Nice bass. Thank you for leaving comments on my posts. I saw them on my phone but since there is no more Blogger app, I have to wait until I log into the computer. We had a cold front come through on Sat and Sun. It was very odd for it to be 68 outside but that meant I was on the water alone.

Some solid fish there Bill. Have to agree with you, they are an absolute blast on a light fly rod (and if you like that, you've gotta try a tenkara rod someday). Thanks for taking us along on "The Quest"

Michael
Glad you mentioned the Tenkara, because back in 2015 I was fishing with my 11 ft. crappie pole on Smith trying to land some crappie when a big bluegill nailed my jig, what a fight on the limber jig pole. I can imagine what the Tenkara would feel like.
Don't be surprised if you read a post with me fishing with the Tenkara in the near future----perfect for high sticking on some of the holes on the Sipsey.
thanks for the comment

Josh
Hope you had success fishing after the cold front, enjoy the reads on your blog. Thanks for sharing

I'll bet those hefty bluegills really bend a light rod and send some cool vibrations from the lake. Nice going, Bill, and good luck with the
quest!

Walt
Those big bull gills put up quite fight for sure!!! Thanks for the comment

Yes, Bill!!! I hope you get those last big bluegill hooked and brought to hand. Those are some monsters, and so much fun on a light weight rod, as you already know. I need to get out fishing for some bluegill.

Justin
Mark April and May on your calendar for next year, that's when the spawn begins; spawning bluegill is hard to beat using the fly rod. Thanks for the comment